Olga is the official representative of the FSRC in Sweden, Spain and Latin America Spanish speaking countries.

Master Joseph Yu wrote the following about Olga:
“Your honesty and integrity together with a good ability to understand metaphysics, makes you a very special person in this field.
Being your teacher is an honour for me.
I am convinced that you are a great teacher in Feng SHui as well as other branches of Chinese metaphysics.”
Joseph, Feng Shui Research Center

Biography:
Olga Garcia was born in Barcelona, Spain, in a multi-cultural environment. This allowed her to speak fluently Spanish, Catalan and French at the age of 6 years.

Parallel to her studies, she learned music and piano. After receiving her bachelor of music, she lived in Germany studying at the Hochschule Musik Detmold.

She lived in Sweden from 1969 to middle of 2005. Speaks Swedish, Spanish, Catalan, French, English, and understands some Italian, Portuguese, Norwegian, Danish, German and Japanese.

Olga was a piano teacher at the Music School of Gävle and Härryda Kommun.

She always maintained her contact with Spain and didn’t stop moving in an open environment, travelling around the world, with music as her scenery.

After being in Japan several times, she obtained the First Diploma School Ikebana “Sogetsu School” of Tokyo, she began her path of studying Asian healing arts, which continued until today.  She studied Karate, Qi Gong and Yoga and also got a Bioenergy and Healing Diploma awarded by Professor. Boris Aranovich, founder of Alternative Medicine University of St. Petersburg, Russia.

She translated and taught Master Joseph Yu’s all correspondence courses and topics in Spanish and Swedish. She offers online some of Master Joseph’s upgrading seminars and her own courses in English.

Master Olga Garcia has been given the power to teach Master Yu´s Courses. 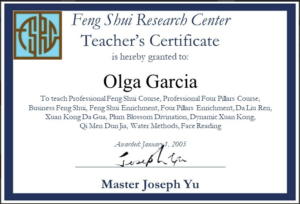